But Not For Grace

By: Tamara Gibbs
In: But Not For Grace
Tagged: christianity, devotional, faith, grace, jesus
With: 0 Comments

It was supposed to be a quick two-hour drive from home back to college after a long weekend with family. As she made her way down the two-lane highway, she took in the familiar landscape. Small towns and farmland whizzed by in her side view mirror as the radio played. It was beautiful. And then, it wasn’t.

She could feel her car slowing down no matter how hard she pressed on the gas pedal. Was it the steering wheel? Had the transmission gone out?

Suddenly, the car stopped. One of the rear tires looked like melted rubber crunched underneath the rim. Making matters worse, it was getting dark. The sun was setting over acres of neatly tilled soil. The only sign of civilization was a farmhouse about a half mile from the road. That was it. Long before mobile phones had become a daily necessity, she was alone with a flat tire without a soul on the horizon. Who would come to the rescue?

Most people would call what happened next pure luck. She calls it grace. When life circumstances leave us stranded, without grace where would we be? Grace showed up in the form of another motorist who would stop to help, change the tire, and teach her how to replace the tire while he made the repair. He would give her his phone number, asking for nothing in return except a phone call that she had arrived safely back at college.

Isn’t that how God works? Time and time again, He goes about granting grace, saving people from themselves when their life choices leave them sidelined on an unknown road. Then He takes that same grace generously granted without any expectation and blesses them with a second, third, fourth or however many chances it takes to change their hearts or in this instance, a flat tire. He expects nothing in return except that their soul is well and that they do their best to stay on the road He’s paved for them, a road built on grace.

“But whatever I am now, it is all because God poured out his special favor on me— and not without results. For I have worked harder than any of the other apostles; yet it was not I but God who was working through me by his grace.” (1 Corinthians 15:10) 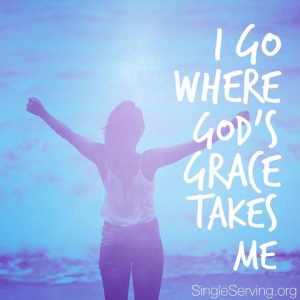